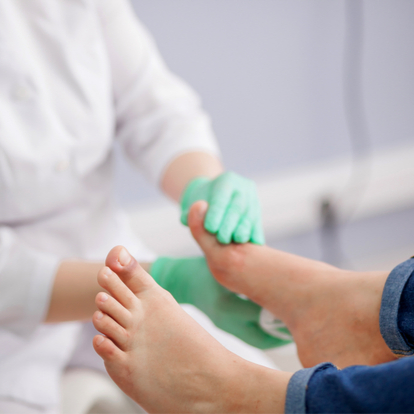 It is estimated that about one-third of people with diabetes will have a skin disorder at some time in their lives caused by the disease. Diabetics are more susceptible to bacterial and fungal infections; allergic reactions to medications, insect bites or foods; dry itchy skin as a result of poor blood circulation; and infections from foot injuries for people with neuropathy.

There are a number of diabetes-specific skin conditions:

Acanthosis Nigricans
A slowly progressing skin condition, which turns some areas of skin, usually in the folds or creases, into dark, thick and velvet-textured skin. Acanthosis nigricans often precedes the diagnosis of diabetes. It is sometimes inherited, but is usually triggered by high insulin levels. It can occur at any age and usually strikes people who are obese. There is no treatment for the condition except to reduce insulin levels. Prescription creams may help lighten the affected area.

Diabetic Blisters
Rare blisters that appear on the hands, toes, feet or forearms that are thought to be caused by diabetic neuropathy.

Diabetic Dermopathy
Round, brown or purple scaly patches that most frequently appear on the front of the legs (most often the shins) and look like age spots. They are caused by changes in small blood vessels. Diabetic dermopathy occurs more often in people who have suffered from diabetes for decades. They are harmless, requiring no medical intervention, but they are slow to heal.

Digital Sclerosis
This condition appears as thick, waxy and tight skin on toes, fingers and hands, which can cause stiffness in the digits. Getting blood glucose levels back to normal helps alleviate this skin condition.

Disseminated Granuloma Annulare
A red or reddish-brown rash that forms a bull's eye on the skin, usually on the fingers, toes or ears. While not serious, it is advised that you talk to your dermatologist about taking steroid medications to make the rash go away.

Eruptive Xanthomatosis
A pea-like enlargement in the skin with a red halo that itches. It most frequently appears on the hands, feet, arms, legs or buttocks. It is often a response to high triglycerides. Keeping blood glucose levels in the normal range helps this condition subside.

Necrobiosis Lipoidica Diabeticorum
This condition is similar to diabetic dermopathy, but the spots are larger, fewer, deeper in the skin and have a shiny porcelain-like appearance. It is often itchy or painful. It goes through cycles of being active and inactive. It is caused by changes in collagen and fat underneath the skin. Women are three times more likely to get this condition than are men. Typically, topical steroids are used to treat necrobiosis lipoidica diabeticorum. In more severe cases, cortisone injections may be required.

Vitiligo
Vitiligo refers to the development of white patches anywhere on the skin. It usually affects areas of skin that have been exposed to sun. It also appears in body folds, near moles or at the site of previous skin injury. The condition is permanent and there is no known cure or prevention. However, there are some treatments that can be used to improve the appearance of the skin, such as steroid creams and ultraviolet light therapy.

Send Us an Email